Rebel With A Cause

Nominations are now open for Society of the Arts Inductees, Athletics Hall of Fame Inductees, and Knollwood Award Honorees.

Please complete your nominations by November 5, 2021

Congratulations to our award 2021 Honorees!

Society of the Arts

Julia Noone '07
Julia Noone is the Assistant Concertmaster of the Louisville Orchestra. Additionally, Julia has appeared as guest Concertmaster of the Royal Scottish National Orchestra and the Jacksonville Symphony and as guest Principal Second of the Rochester Philharmonic. As an auxiliary musician, Julia has performed with the Boston, Indianapolis, and St. Louis Symphonies. During the summer, Julia plays in the section of the Sun Valley Music Festival Orchestra in Sun Valley, Idaho. Julia studied at the New England Conservatory of Music in Boston with Masuko Ushioda before becoming a fellow at the New World Symphony, where she was frequently Concertmaster and won the annual concerto competition, performing Szymanowski’s Second Violin Concerto with the orchestra. She spent multiple summers studying in Germany at the Schleswig Holstein Musik Festival and the Moritzburg Academy before becoming a fellow at the Tanglewood Music Center, where she spent three summers performing often as Concertmaster and was awarded the Jules C. Reiner Violin Prize.

Timmary Leary '89
Timmary Leary received a B.A. in Design/Biology from Providence College, an M.A.T. in Art Education from Rhode Island School of Design, an M.A/C.A.G.S in Rehabilitation Counseling from Assumption College, and a MA in administration from Worcester State University. Timmary is currently the Visual Arts Curriculum Liaison in the Worcester Public Schools where she facilitates professional development, develops curriculum and supports art teachers. Timmary has worked with the Department of Education in their push to design a new Arts Framework that is inclusive and supports the needs of ALL learners as the Lead Ambassador for Central MA. In addition to her role with the WPS, Timmary is an adjunct graduate instructor at the Clark University”s Graduate School of Urban Education and a design faculty member at Anna Maria College. She is a national faculty member for CAST and Universal Design for Learning in Wakefield, MA. Locally, she serves on the board of directors for ArtsWorcester and teaches AP Art History at the Worcester Art Museum. Her spark for supporting all students in their educational journey and as an artist is grounded in her Notre Dame experience; inspired by the culture building, personal relationships and supportive acts at the core of her experience.

Tara Young is an experienced museum professional, content developer, and faculty member in the Tufts University Museum Studies program. Currently an independent consultant, she has held positions at several museums on both coasts. Most recently, she served on the founding staff of the Museum of Russian Icons, in Clinton, MA, which received American Alliance of Museums (AAM) accreditation in 2015. Tara has degrees in the history of art and architecture from Harvard College and the University of Pittsburgh, as well as a Certificate in Nonprofit Management and Leadership from Tisch College of Civic Life at Tufts University. She is the author of So You Want to Work In a Museum? (2019) and editor of Creating Meaningful Museum Experiences for K-12 Audiences: How to Connect with Teachers and Engage Students (forthcoming), both published by Rowman & Littlefield and AAM. Tara lives in Central Massachusetts.

Moira Moynihan-Manoog '86
Moira Moynihan-Manoog is a lifelong resident of Worcester. She is a graduate of Boston College with a degree in Art History. Moira is a wife, mother, business owner and serial volunteer in the community. She is the Firm Principal at MSW Financial Partners where she specializes in working with individuals and businesses as they grow, protect and transfer their wealth. Moira has served as a Trustee of the Worcester Art Museum and as the Chair of its Investment Committee. She is a Corporator at Bay State Savings Bank and a member of the Worcester Garden Club. Moira most recently served as the President of the Worcester Club and is the first woman to hold that position in the Club’s 130-year history. Currently, Moira is serving as the Co-Chair of the Worcester Historical Museum’s spring exhibit Pretty Powerful: 100 Years of Voting & Style. When not working or volunteering, Moira can often be found in her favorite Pilates and Yoga studios throughout Worcester or posting photos on social media of her two favorite furry children Oscar and Lucy – her somewhat miniature dachshunds. She loves traveling with her family, cooking elaborate meals, plotting future business endeavors, and spending time at the beach.

Tammy Ragsdale Pozerycki '88
Tammy Pozerycki has 24 years of experience working with people living dementia, their families, caregivers, and healthcare professionals. Tammy is personally familiar with Alzheimer’s Disease as her maternal grandmother lived with the disease for years. It was a firsthand experience on how this affected her family members. Tammy is a Board-Certified Dementia Educator through the National Institute of Dementia Education. She holds a master’s degree in Counseling Psychology. Tammy holds the following credentials: Certified Alzheimer’s Disease and Dementia Care Trainer; Certified First Responder Dementia Trainer; Certified Dementia Practitioner, and Certified Online Training Professional. She was the founder of Pleasantries Adult Day Services™, in Marlborough, MA, a memory care adult day program located in a residential home. She established the first Memory Café in Massachusetts in 2011, Create A Better Day Café™. Tammy is the founder of the specialized dementia training and consulting business Alternatives in Alzheimer’s Care™. She is the creator of the nationally approved Essential Skills in Dementia Care™ credentialing curriculum. As a national presenter, she was chosen to speak at the 2013 Alzheimer’s Association’s International Conference. She advocates for quality of life for people with dementia and their care partners. As a long-term volunteer for the Alzheimer’s Association, she facilitates caregiver support groups, worked as clinician on their 24-hour helpline, and served as Chairperson of their community-based partnerships. As an advisor and educator, she assisted the leadership team for the Dementia Friendly Community efforts of the towns covered by Bay Path Elder Services. As a Dementia Specialist, Tammy continues to plant seeds for compassionate and competent care throughout New England and beyond.

Victoria Waterman has made a life-long career of advancing women in the workplace and is uniquely positioned to empower today’s girls to be tomorrow’s leaders. As the Chief Executive Officer of Girls Inc. of Worcester, she puts her inspiration into practice by preparing girls to successfully reach and climb the ladder of success with confidence. Her commitment to empowering women began in the banking industry while successfully developing programs to address the underserved needs of women consumers. The fuel for this passion ignited when she presided over Leading Women Massachusetts, a global women’s leadership organization. She takes pride in leveraging her strong business/strategic/financial acumen to guide a dramatic financial turnaround and lead a successful $5 million capital campaign for Girls Inc. of Worcester. As a speaker, she is a frequent presenter on topics including: issues affecting girls, women’s leadership, and business acumen for nonprofits. Most recently, she was honored to join the TEDxNatick stage with her talk titled “Today’s Girls are Tomorrow’s Leaders”. Victoria was named one of the “Outstanding Women in Business” by Worcester Business Journal and was showcased as one of “Women CEO’s Leading in Central MA” by GoLocalWorcester. She was also the national recipient of “Excellence in Board Leadership” award from Girls Inc. And now she is honored to receive an esteemed Notre Dame Academy's Knollwood Awards for her recognition as a “Rebel with a Cause”! She is a strong role model for the Girls Inc. mission of “Inspiring all girls to be Strong, Smart, and Bold”. Watch her TEDxNatick talk here: https://www.youtube.com/watch?v=Ur3vRU8co4I

Katherine Mulford Phillips '01
My name is Katherine Mulford Phillips and I am a member of the graduation class of 2001. I have grown up with Notre Dame Academy in my life as both my mother and sister are graduates and my mom returned to NDA as a teacher. I have followed in her footsteps and have been teaching 5th grade in Leominster, MA for 15 years. I am surrounded by many supportive friends and family including my two children, Lilly and Brayden and my husband, Corey.
Athletics have always been an integral part of who I am and how I live my life. I have been privileged to learn many life lessons from numerous coaches and athletes throughout my journey. While at NDA I was lucky enough to be a three sport varsity athlete in Field Hockey, Basketball, and Spring Track. I was given the honor of captain and also named a CMC All-star for both Field Hockey and Track. I was able to be a part of many championship teams and runs throughout my career and made many lasting memories and friends along the way. My athletic career continued at Saint Anselm College as a member of the Field Hockey team where I was named Rookie of the Week in the NE-10.
Athletics continue to be central in my life as I have been able to be the assistant coach of the Notre Dame Field Hockey team for 15 years. This opportunity has allowed me to help young women see the importance of being on a team and being responsible for a goal greater than yourself. I am honored to be inducted into the Notre Dame Athletic Hall of Fame and to be surrounded by the many women who have been a part of the greatness that is NDA athletics.

Beth Andreoli Smiley '82
After graduating from Notre Dame Academy in 1982, Beth Andreoli Smiley went on to earn her Bachelor’s degree in Sociology from the College of the Holy Cross. While studying at Holy Cross, Beth was also a member of the Varsity Field Hockey team. Beth worked in health care as a Patient Relations Coordinator at Fallon Community Health Plan, and as a Physician Recruitment Coordinator at Fallon Clinic before taking time off to raise her four children Andrew, Allison, Grace, and Kate. All three of Beth’s daughters graduated from Notre Dame Academy. Beth is currently an Underwriting Coordinator for Managed Wealth Strategies.

Below you will find our recipes for our version of a baked brie, onion and raisin marmalade, and Jarnac cocktail. The baked brie is a fun savory ‘twist’ on a classic, and the Jarnac celebrates both local and classic spirits.

If you don’t have time to make your own onion marmalade, don’t fret! Stonewall Kitchen makes a really beautiful onion chutney that makes a perfect substitution and is pretty widely available in grocery stores. Also, generally in the restaurant we make everything from scratch, but you have to know when to fold ‘em; we use a frozen puff pastry for this particular application – it’s tasty, reliable, and above all EASY.

You can build your brie a day in advance if that’s how your schedule stacks up; just pop it in the fridge once it’s all wrapped up and pull it out to bake when you’re ready.

The recipe below makes enough to serve as an appetizer for 4-6 adults. I like to serve it with some spiced or candied nuts, as well as some dried fruit (apricots are great!) and some crackers. However, the shape of these braids makes them infinitely snackable and easy to pop in your mouth all on their own!

This cocktail takes it’s name from the origin of Domaine de Canton liquor; Jarnac, France. It is bright, refreshing, and just what you need to break up the richness of your baked brie!

All of the spirits should be readily available at any quality retailer, we find them at Whole Foods. You should be able to find the Amarena cherries there as well. If you like Manhattans, Amarena cherries go great in them, too. And on ice cream. And pancakes. And, well, everything! 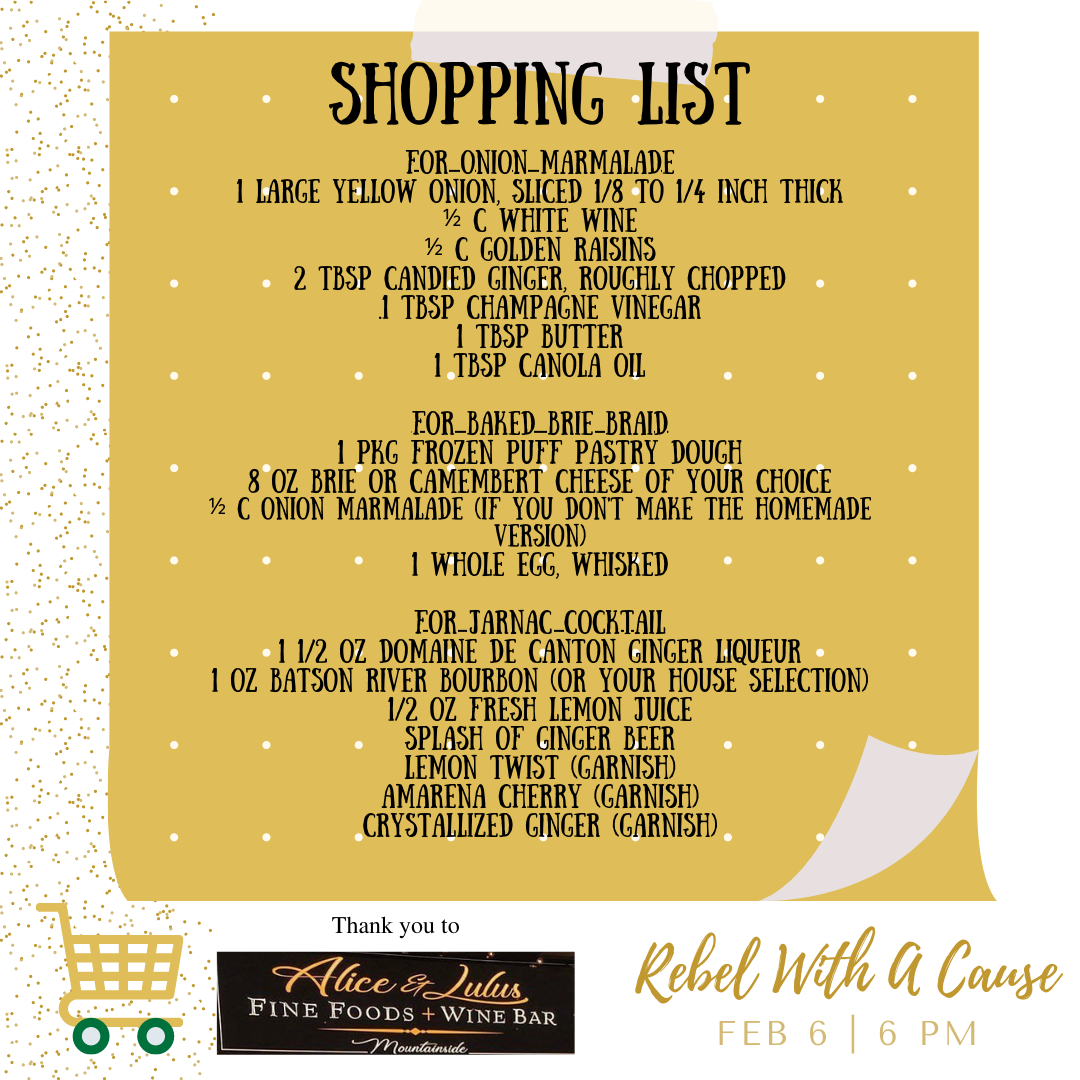